The Ganges is the sacred river for Hindus, a religious symbol in India. Considered in Hinduism as  Maa Ganga (mother Ganges) or Ganga Deví (Goddess Ganges), its waters are born in the Himalayas, at more than 4,500 meters above sea level. According to tradition, every immersion in the Ganges cleanses a sin and depositing the ashes of the deceased in its waters prevents them from continuing the cycle of reincarnations. The river passes through several places considered also sacred:

This is one of the sacred places of Buddhism, since it is believed that Buddha’s first sermon took place in his Gazelle Park. Here you can see the stupa of Dhamek Ahamekh 15 meters high. Haridwar it is also a holy city of Hinduism. It is believed that the bend of the Ganges that passes through here, just when it enters the plain, has miraculous virtues and its waters are much appreciated by the population. The staircase known as Har ki-Paori Ghat is the most important area. During the celebration of the feast of the Maha Kumbh Mela, millions of pilgrims travel here.

It is a place dedicated to meditation and retreat by yogis and sadus. Travelers can access some places like the Ashram of Shiwamanda, where the teaching of the Vedas is practiced, considered a source of all religions. The practice of yoga is also disseminated, considered the means of materializing thought. River Rafting is the one of the famous adventurous activity. 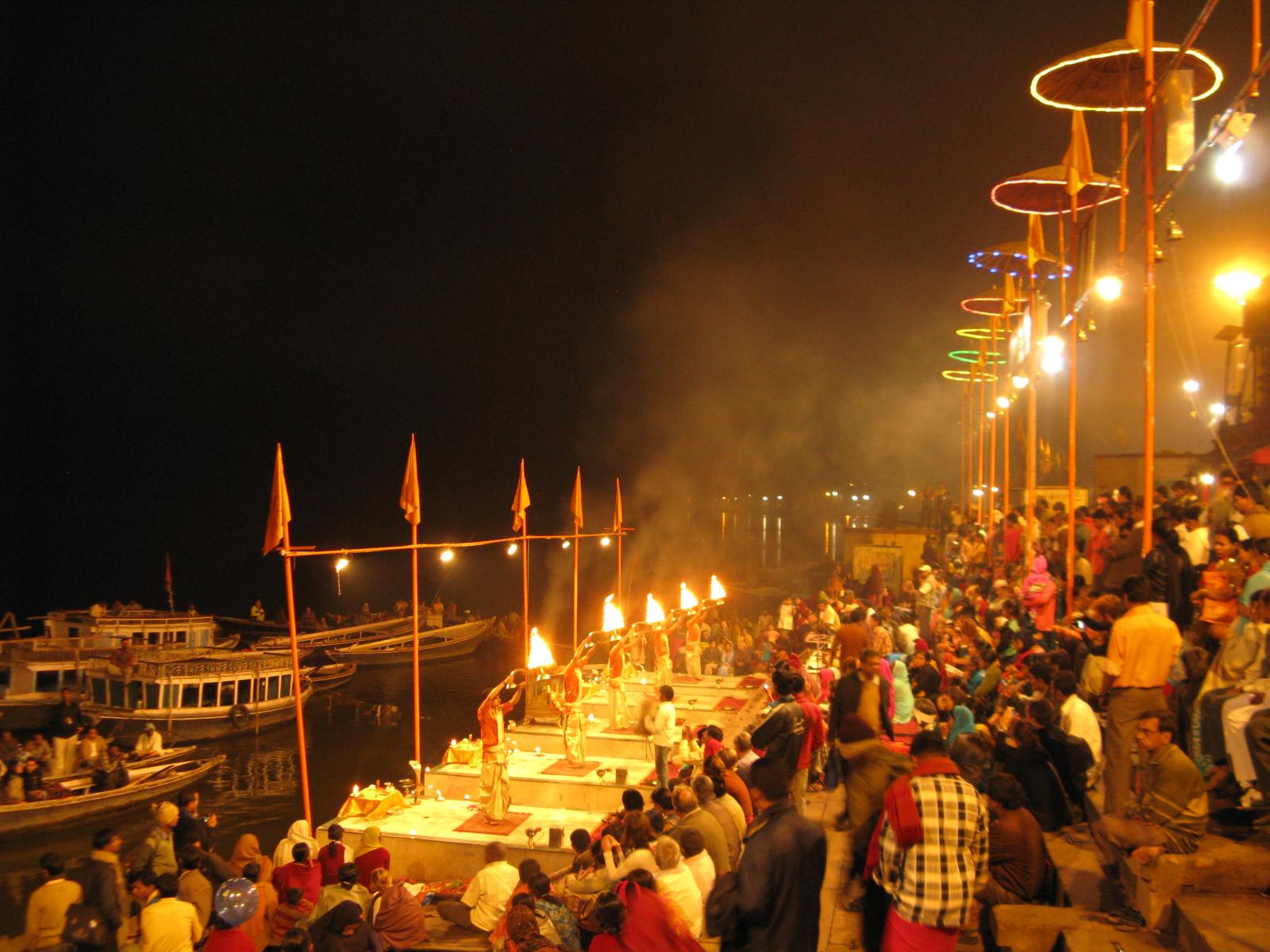 This is the holy city par excellence for Hindus. According to the rite, the Hindus have to visit this city at least once in their life and perform the ablutions in the Ganges from the ghats, which are the stairs that give access to its waters. In addition, the traveler can find in this city many places of interest, such as the Golden Temple or Vishvanath dating from 1777. The temple of Durga is well known for the large number of monkeys that live inside. The Bharat Mata temple, dedicated to “Mother India” and founded by Mahatma Gandhi is also worth a visit. Ganga Aarti is the one of the famous attractions of Varanasi which performed at Dashashwamedh Ghat in the evening.

Every year many pilgrims come here to bathe in the waters of the Ganges between January 15 and February 15, which is when the Magh Mela takes place.  Located at the confluence of the Ganges and the Yamuna, it is a very important place for Hinduism. Kumbh Mela 2019 is the largest pilgrimage in the world.

This region has great relevance for Muslims in India. It has important monuments of Islamic character such as the Rumi Gate, with a beautiful arch sculpted in the rock of 18 meters high, the Imambara and its mausoleums or the magnificent Constantia Palace. These are just some of the interesting places for the traveler those that the Ganges passes, but there are many more. We encourage you to discover them.

Best Honeymoon Destinations within the USA

Booking Travel Tickets Online Vs Booking Tickets at Ticket Counter: Which is cheaper?

View all posts by sophiapeterson →

Best Honeymoon Destinations within the USA

The Bones & Muscle Nutrients You Need To Stay Healthy

Myths About Rated Gynecologist in Dwarka

The World of Steam Punk Accessories

A Variety of Styles of Hijab and Khimar

Are U Looking for Social Media Optimization Companies in Dallas?

The Whereabouts of the Bolt Tightening Torque Machine

Why there is a Gap between Primary and Secondary Education in India?

How to Remove Kidney Stone – The Ultimate Guide

Five tips to negotiate on a car loan